450 years ago, Count Egmont was beheaded on Brussels’ Grand-Place. After his death, Egmont became a symbol of moderation and tolerance in turbulent and polarising times. The story of his life has inspired many people in subsequent generations and still shines today: this Egmont throws a critical light on our own era.

In this production, the text and music tell a fascinating and impartial tale of the historical facts from a contemporary perspective, with a nod in the direction of Goethe and Beethoven. None other than Jan Decleir and Peter Van Den Begin play the historical roles of Count Egmont, Margaret of Parma, William of Orange and the Duke of Alva.


More than 450 years ago, Count Egmont was beheaded on the Grand Place in Brussels. The murderous and repressive reign of Philip II in the second half of the 16th century shook the very foundations of the Low Countries. The execution of the popular Count Egmont unleashed a wave of unrest among the population and heralded the bloody Eighty Years’ War.
After his death, Egmont came to symbolise moderation and tolerance in turbulent, polarising times. His life story inspired many generations to come and still resonates today.

Goethe and Beethoven wrote their own Egmont. This production turns a fierce spotlight on history, but it also shows our own time in a critical light. In that sense it is just like Beethoven and Goethe’s play more than 200 years ago, in the turbulent age they lived in. Beethoven wrote his Third Symphony in honour of Napoleon, but immediately scrapped Bonaparte from his score when the general pronounced himself Emperor and limited the freedoms gained in the French Revolution once again. Egmont is Beethoven’s celebration of the free individual. 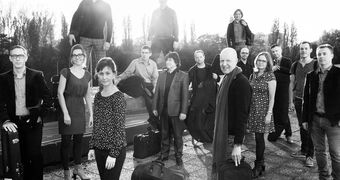 a production of
Het Banket, I Solisti, Vlaams Radiokoor