As part of #FakeImages, Cultuurcentrum Mechelen together with Kazerne Dossin organises the concert series ‘Entartete Musik’.

In 1938, the Nazi regime mounted an exhibition on music: ‘Entartete Musik’ or ‘Degenerate Music’. Many musicians and composers emigrated in time, others were deported to one of the concentration camps, or, if they had a bit of ‘luck’, to the ‘model ghetto’/camp in Theresienstadt.

This concert is a humble tribute in the form of a musical journey: from bustling Berlin to the horrors of the Holocaust. But music survives and tells us of the lives and dreams of these banished and murdered generations.


Many musicians and composers could feel the storms on the horizon in the 1930s and emigrated in time, often having to start over in their new home. Others were deported to one of the concentration camps, or, if they had a bit of ‘luck’, to the ‘model ghetto’/camp in Theresiënstadt.

There, music made for a welcome distraction from the harsh conditions and continual fear. The majority of these musicians lost their lives in the end, and were more or less forgotten after the war. 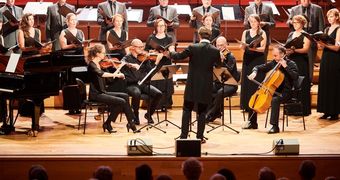